continuation of our vacation.  you can also read parts one, two, and three...

since patrick's girlfriend shelby had friday off work, we decided we should try to head to sonoma for a short while.  drinking wine is definitely more fun with friends, and matthew and patrick or more beer and brat guys than wine and chocolate guys.  after asher's monumental breakdown in the toy store that ruined our entire days plans the day before, we decided to start this day after his nap.  we would be crunched for time pretty good by the time we got there, but a couple tastings and a walk around town would be good enough for me. 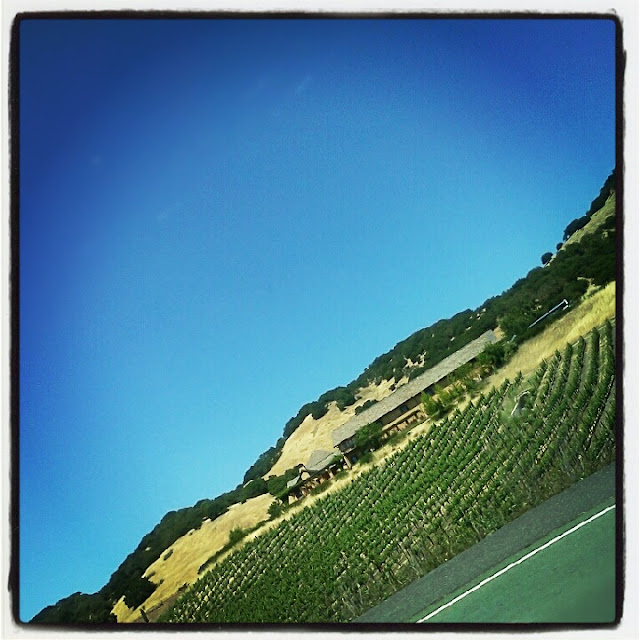 the drive was beautiful.  there is nothing like the idyllic scenery of a vineyard to me.  the contrast between the lush green grape vines, and the yellowed dry prairie grasses was so intriguing to the eye.  i was awed by the climate and vegetation the whole vacation.

sonoma was adorable, we all decided we would like to live there.  i didn't snap any pictures of town square... really my pictures were pretty lacking on this trip keeping track of a baby is hard enough without a camera stuck to your hand and eye. 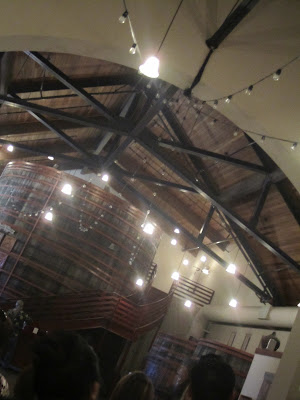 we got there just in time for a free tour at the closest vineyard to town.  we followed a group of people at 3:15 from the big fireplace in the tasting room just as we were instructed.  at the end of the tour we realized this was a private tour, and we we should not have been following them at all... oopsie.  this is matthew's worst nightmare, the rule follower that he his. 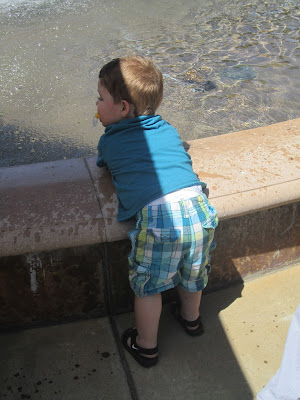 asher loved playing in the fountain.  it was hot, so we were happy to oblige. 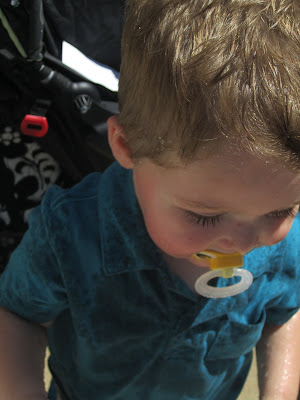 we meandered around town a little and tasted a few wines.  then matthew and patrick offered to baby wrangle in the central park so shelby and i could taste some more.  it didn't take long for asher to verge on breakdown.  so we got back into the car, bought him some chicken nuggets, and headed back home. 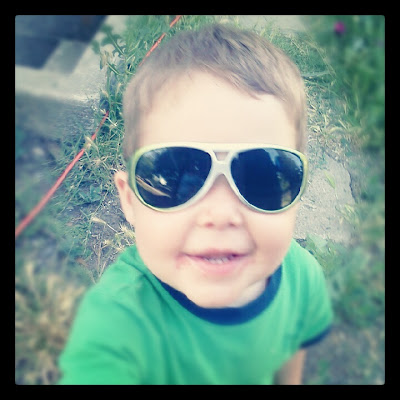 saturday we did nothing at all.  i mean nothing.  asher woke up extra early, so when he went down for a nap before lunch, i did too.  we ate in-n-out, and sat on our butts all day.  matthew and patrick ran to the store for video games and beer, and i debated not getting dressed.

i eventually did, and matthew and i headed out to dinner while patrick and shelby watched the baby boy for us.  we had talked about a big fancy dress up and go into town date night while we were there, but traded it for a casual drive to the closest mexican restaurant date night.  we talked over enchiladas and strong margaritas and enjoyed our time together as 2.  we are so busy, this luxury rarely comes, and we were so glad uncle patrick and aunt shelby offered to sit. 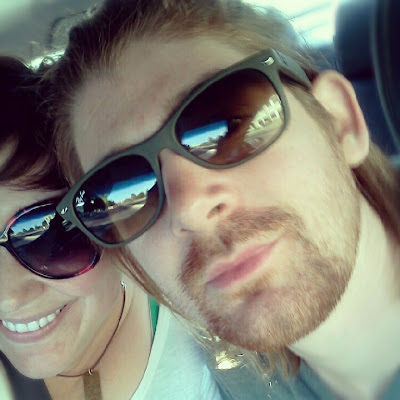 sunday should have been the last full day we had, and there was more we wanted to do in san francisco.  we headed out early with a stop at ikea, where i bought some cute pink kitchen towels.

we parked and barte-ed our way into the city.  yes, i just made bart (bay area rapid transit) into a verb, what of it?  i like public transportation.  i wish we lived in a city were i could use public transportation and not have to depend on a car.  matthew is glad he lives in a place where he can drive and park 2 seconds away from wherever he wants to go.  we are so compatible ;) 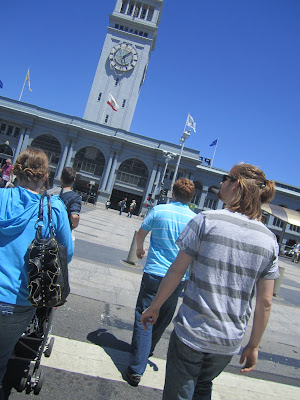 we walked in the shade of cloud grazing banks, and perused the shops at the ferry building.  and then we cruised down the side of the bay, on our feet.  asher wanted to run. and jump. and do anything but sit in a stroller.  so we walked.  we made it to pier 39 and thought we were close to the walk to coit tower.  so shelby got walking directions on her phone, and we started footing it...

we walked up a beautiful stairscase through prestine gardens and houses where i wondered how in the world these people drove to get milk when the fridge was empty.  we marched up 4,289 steps.  i don't really know how many steps it was... but it felt like a million.  i almost died.  matthew seemed unscathed. 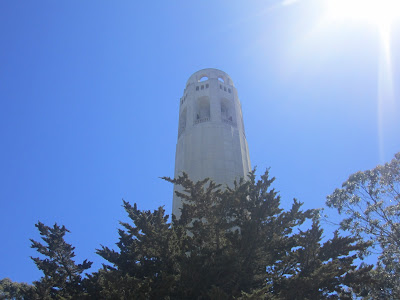 the views from the tower were beautiful. you can see everything in all of san francisco.  lombard street, the cable cars, the bridges, the parks, the tall buildings, the quaint houses, the bay, the wharf, the church steeples, and a statue of christopher columbus.  when it was time to leave the tower, we took the bus down the hill. (note to self: next time take the bus up the hill, and the steps down).

we headed to fisherman's wharf, where i think i could have really stayed all day.  it was packed with tourists on this sunny and cool sunday.  we walked in and out of shops and admired the boats and water.  we walked and walked, all the way to ghiradelli square.  on the way i bought a handmade christmas ornament from a vendor on the street.  this nice old man said he and his wife make each ornament themselves.  he thanked me for finding something made locally. 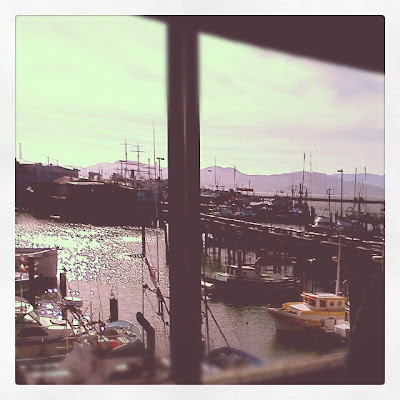 then we headed back to fisherman's wharf for some seafood.  fresh seafood eating was on my list of things to do, and we found a restuarant on the wharf serving fresh half crab and clam chowder for their early bird dinner special.  the view from the restaurant over the boats and bay was just as you would imagine... the interior a little kitchy.  my crab and chowder was delicious.  we were all a little tired, and asher was very tired... so we got on a bus back to the bart and under the bay back to our car. 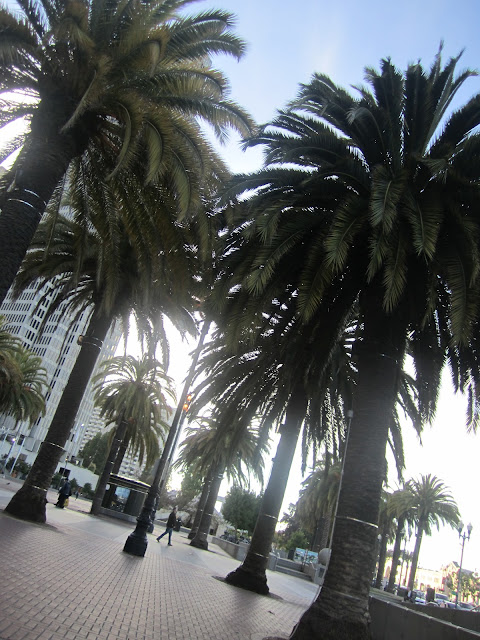 what a lovely way to spend our last day of vacation in the city... or so we thought.