the city of wind and hills... aka, vacation part 2.

once we saw asher's face we knew we were in trouble.  he was clearly not well.  we were supposed to meet that chick erin, blog reader, in sonoma that day.  she works in the wine industry and had graciously offered her services to us while we were there.  we hemmed and hawed over what to do.  it was memorial day.  we googled rash pictures.  as i suspected, it was a dead ringer for hand foot and mouth disease.  i tried calling our pediatrician, their phones were down.

we decided to scrap our first day plans and stick close to patrick and shelby's.  after asher's nap we thought we'd try a quick trip to a park by the water.  asher may have been sick, but we were determined to not let it ruin our vacation.  so, we drove to berkley. 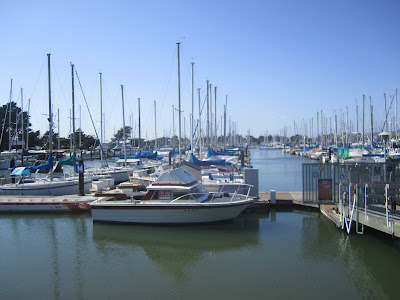 asher liked the boats in the marina.  we walked out on the pier (it was like a mile long),  the sun shone big and bright, but the wind was biting cold.  it felt good to be out in the world.  the rolling hills, the water, the sun, the freezing cold 100 mile per hour winds. 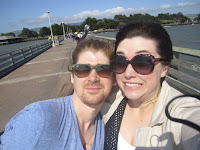 we let asher play on the playground.  matthew was afraid parents would notice he was sick and ridicule us.  there is no telling how many kids went home with hand foot and mouth disease that day... sorry berkley.  then we headed to a tiny beach and threw rocks in the water.  everyone else skipped rocks, asher and momma threw rocks.  apparently my rock skipping attempts were comical.  i am no athlete. 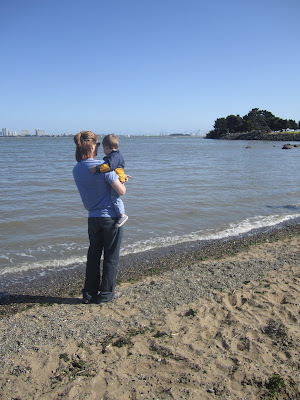 we ate pizza and headed home in time for asher's bedtime.  he cried and whined a lot in the car.  he asked for "paradise" over and over and was mad when the zune would not oblige. 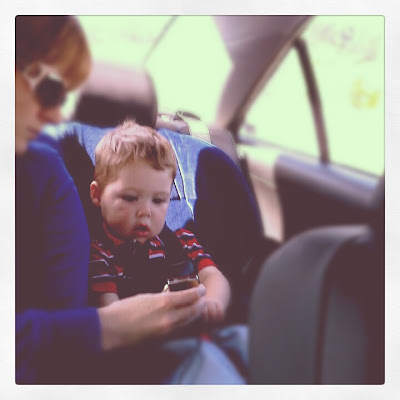 the next day asher looked worse, but we knew we had to try to do normal vacation activities.  while shelby worked, patrick directed us into the city.  i had a list of things i wanted to do.  we started with the golden gate bridge. 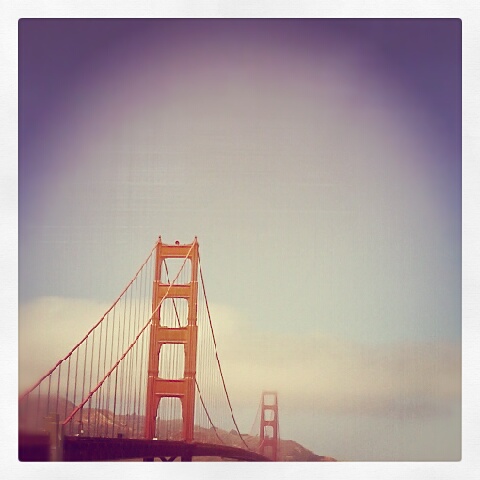 it's really beautiful.  the landscape, the water, the blue sky, the magnificent engineering feat.  we walked around the presidio side of the bridge and loved it there.  a nice brightly dressed couple took our picture for us. (not pregnant again, just fat) 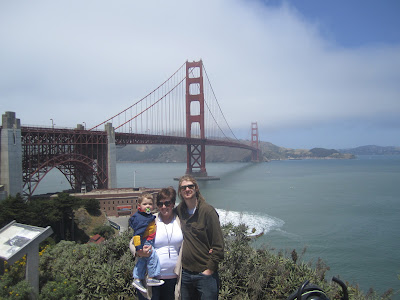 no christmas card picture was taken at the bridge like i wanted... it was clear that no good picture of asher would grace our camera on this trip.

then we drove through town.  we drove by the painted ladies, and up and down hilly streets.  we saw old churches, missions, and quirky shops.  i people watched, and chatted with the nurse from the pediatrician's office on the phone.

we ate at the house of nanking in china town, by my mother in law's recomendation.  asher quietly played with his cars and ate rice while i ate one of the best meals of my life.  seriously, it makes my top 5 favorite things i ever ate.  i wish i was eating it right now.  i may dream about it tonight. 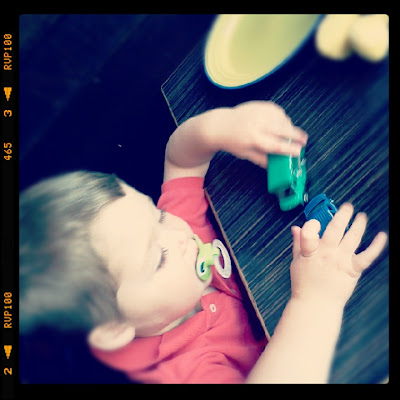 asher was beginning to fall apart, but we thought we would try one last thing.  we headed to pier 39 to see the sea lions.  pier 39 was not really our thing.  we giggled about the big business sponsored "photo spots", and people watched as we walked.  but boy oh boy did asher dig the sea lions.  he kept escaping and running back towards them. 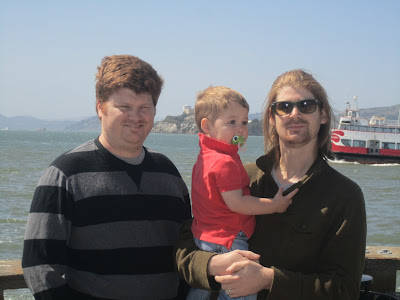