monday morning we woke up early and did laundry and packed for our trip home.  with asher finally feeling better, we were anxious to get on our way and back to our own beds.  vacation is great, but the best part of any vacation is coming home.

it was a little cloudy, but not windy, not rainy, no abnormal weather of any kind.  by 11:30 am we had said our goodbyes and were in the car with all our stuff ready for our 3:30 flight out of town and back home.  given our disastrous experience at the car rental office on our arrival, i wanted plenty of time to return the car and get to the airport.  according to everything i had read sfo recommended arriving at the airport an hour early, i wanted to give us at least 2.  missing a flight is my worst nightmare.  as we pulled out shelby joked  about hoping we wouldn't have to drive back there tonight when our flight was cancelled, we laughed.

as we pulled into the parking lot of the car rental office i received a text message.  our flight had been delayed, we would no longer be taking off at 3:30pm, we would be taking of at 6:00pm.  i immediately knew this would not be good.  omaha is a tiny airport, i mean miniscule.  i could get through checking bags and security and to the gate in 15 minutes.  there are not many airports (or airlines) that fly into eppley airfield (yes airfield, we are not even an airport).  i can tell you off the top of my head the few cities we can fly direct to on southwest: minneapolis, chicago, denver, phoenix, las vegas. (there are a couple other direct stops on other airlines; but we always flew southwest, as most poor people do- cheap flights, no baggage fees)  we were due to arrive just before midnight.  we were certainly the last flight of the day.

we shrugged it off and assumed once we got to the ticket counter they would be able to get us there somehow.  we returned the car without incident and shuttled to the airport.  after going up and down and back and forth and all around to get to the baggae check we got another text message.  our flight was delayed another 30 minutes, we would not take off til 6:30pm.  it was 1:15pm, our flight was originally scheduled to leave at 3:30.  i tried to remain calm and think that there was no way we would be stuck here tonight.  but as we turned the corner to the ticket counter, my hope was diminished.  the line was hundreds of people deep.  it wove in and out and back and forth and far beyond those little nylon line guides.  we got in line and tried to keep asher occupied as we waited our turn to learn our fate.

they airline was pulling people out of line that had direct flights to check in quicker... this seemed backwards to me.  nearly 2 hours later we were finally to the front of the line.  the nice girl behind the counter tried to find us a way home... the last possible chance was a flight to denver that left in 35 minutes.  we would have to fly standby.  she assured us it was a good decision and that we would be priority to get on the plane.  she checked the number of people that had already checked in and said as of now there were still 10 empty seats.  she checked our bags and wished us luck again assuring us that she was pretty sure we would get on the flight.  we went through security, where my bottle of wine was confiscated (i swear we brought cases back with us from europe, i didn't even think about my 1 stinking unopened bottle).  the tsa lady made me feel like a bad parent, and i swore and almost cried..  then we waited.  and we watched as they gave every last open space to 1 family of 6 people (mom, dad, son, daughter-in-law, son, grandaughter).  i heard them talking to them, i knew they were traveling to denver and no further, i knew they made some big deal about meeting someone there, i knew there were at least two more flights from sfo to denver that night, and i watched as they just gave our last chance home to these 6 people.  i cried.  i made a sour face.  i swore.  and then i waited to talk to the idiot person who just gave my seat away.

i had 4 diapers left in my bag.  i had 1/2 a sippy of milk left (since i kept shoving it in his mouth to try to appease him while we waited).  i had a child who has been sick and away from home for a week and whom we had just made sit in his stroller in a line in the airport for 2 whole hours.  and i had NO WINE.  i stormed back to the southwest line where someone advised me to get in the "direct flight only line".  matthew went to baby wrangle, and my firey hot anger stayed to talk to whomever was going to make this right.  i was yelled it for being in the "direct flight only line" by the teller.  i snapped back.  she wasted 20 minutes of my time looking for a flight, after i told her we just missed our last chance to get out of here tonight.  when they booked us on the flight at 5:50am the following morning, i cried.  then i asked what i was supposed to do in the mean time... she shrugged her shoulders.  "i have no car, no car seat, no luggage, and 4 diapers in this bag because we were supposed to be in the air and on our way home now.  are you telling me that i have to spend the night here with a 21 month old baby?"  she left to get a supervisor.  he came back and tried to tell me it was my fault we "missed" our flight because we checked in only 30 minutes before the flight left.  i think i laughed in his face.  i stood in your line for 2 hours and then was bumped out of priority on that flight by some old man throwing a fit.  he did not give us a free drink for our next fight, he did not direct me to a hotel, he did not tell me how i could get to the bart station.  he made no apologies, he raised his voice with me and told me it was not their policy to help me when when the delays were due to air traffic control.  at this point desperate emotions took over any reasoning and all i could do was cry.  i couldn't even fight with this man, i could scream at him like i wanted, all i could do was cry...

so matthew and and asher and i headed to a quiet corner of the airport to try and decide our next move.  we were out of vacation money, we were exhausted, we had little food, no drinks, and we were stranded.  there, i was finally able to yell... at matthew.  the most undeserving target.  asher was on the verge of breakdown, and i was far beyond breakdown point.  we sucked it up, found our way to the bart station in the airport (literally there are no signs directing you there in the whole damn airport).  we payed $22 for an hour long ride to get as close as we could back to patrick and shelby's (the second to last stop).  where patrick would pick us up in his hooptie with no car seat and drive us back to his house.  it was after 5'oclock; the train was packed, asher was screaming, and we are all tired and hungry.  asher finally got a new diaper, ate some ramen noodles, and went to bed naked (since our pj's were already on their way to omaha).  a glass of wine never sounded so good, too bad mine was in a trash can somewhere at the airport.  i went to bed myself and braced myself for the 3am wake up call in the morning so we could get to the airport in time to make the first flight out in the morning.

we woke up crabby, tired, dirty, smelly, and so anxious to be home.  asher was beyond tired and i sleepily changed him into his second to last diaper and prayed he didn't poop.  he cried the entire time we were in the airport, and when we finally boarded the plane and strapped him in a seat (thank god this was not a full flight and we could set him in a seat) i almost cried from relief. 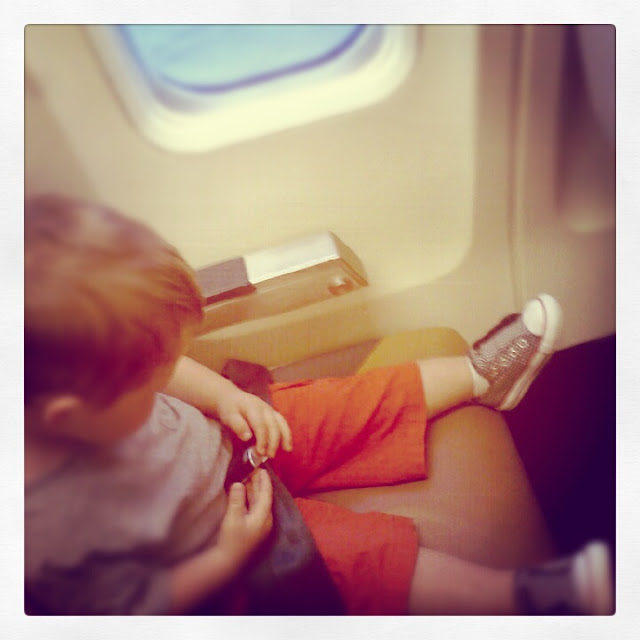 we were finally on a plane home.


one last recap to come... thanks to those who have been patient in this very slow retelling of our first family vacation.


let me state, had we known that there was no chance for us to get home this day, this would have been less of an issue... we would have kept our rental car an extra day, and had one more day of vacation.  however, returning the car and the car seat, packing and then checking our bags to a flight home, being told we should be able to get there, and then spending hours and hours at an airport to be told we would just have to sleep there that night... made this a terrible traveling experience.  they knew by 6 am (or ealrier) that every flight in and out of sfo would be delayed that day (low lying clouds or some crap like that).  i think airlines should try to think of proactive ways to let customers like us (flying to small airport with few connecting flights available, on a late in the day flight, little chance to actually get home, etc...) know far ahead of time that there is a high chance of this happening, and give us time to process and plan.  or let us know first thing in the morning, and see if they can get us on a earlier flight rather than a later one.  and when they can't be proactive in this planning, they need to be understanding and kind to the few patrons like us who end up totally screwed.


post note:  upon our return, i filed a complaint with southwest.  i knew it may not have been their policy to help us with any air traffic controlled cancelled flights, but i thought we deserved better than what we were given. (by my count there were only several people that day that were actually stranded in an airport away from home all night, most people were able to be rerouted, or simply go home and fly out the next day.)  they quickly responded to me and apologized for the inconvenience.  i was assured that it is not their normal practice to pull direct flights out of line to help first.  i was also told that we should have been first priority on that flight to denver we were bumped from, since without that flight we would be stranded overnight (and with a small child).  they apologized for the unhelpful employees and our terrible traveling experience and sent us 2 $100 vouchers for future flights.  while it may have not helped us at the time, i am very thankful that were willing to make this right.  asher and i will (lord willing) be traveling to denver for a long weekend this fall to see my grandpa, my sweet cousins, and meet baby finn (my best firend lizzie's son who is due at the beginning of september).  thank you southwest for attempting to make this right.
Email Post