10 reasons why my husband is the best... 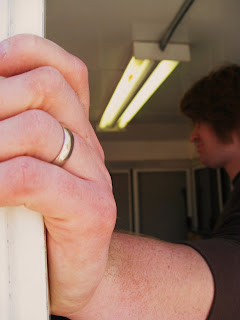 this is my husband matthew... please ignore the florescent light... he always wears his wedding ring. unless he is playing with it. he plays with it a lot, i mean A LOT. it is a wonder he hasn't lost it yet.

matthew and i met in college. he was my baby cousin's roommate. i was friends with his brother. the first night in the cafeteria all my girlfriends oogled matthew. i played it cool. "pfffttt... yah he's alright." soon matthew was helping me lead a small youth group at my parents church. soon he and i became very good friends. my mom loved matthew the first night she met him. "he's a nice boy melinda, why don't you date him." i played it cool. "pfffttt... yah whatever mom, he and i are just friends." it went on like that all school year... and then the summer came. i was on my way to europe for 6 months for a missions internship with school. matthew was heading home to wisconsin for the summer. he didn't come back to school in the fall. i was in romania getting skinny and finding myself. when school started second semester. there was 1 person i couldn't wait to see. matthew. when my cousin yelled up at me in chapel, "hey melinda, little boucher is back" i played it cool. "oh, hey matt... how's it goin'?" standing in the chapel that day where we had stood a hundred times before, something was different. there was a charge in the air. his eyes looked different that day. why did he seem so nervous. why was my heart leaping out of my chest. we were still friends. only now, now i wanted to stay up all night talking to him. now i wanted to hang out with him everyday. i wanted to study in the library so he could study with me. i suddenly didn't know how to talk to around him, the words would get all jumbled and trip over my tongue. it took him nearly 5 months to ask me out on a real date. it was the day he was leaving to go back to wisconsin for the summer. i was a little nauseous in the car, my hands shook and my lips quivered. when he left for the summer it felt like i had a hole in my chest. one day during the summer i came home from work and his brother patrick was waiting for me. we were supposed to hang out that night. "melinda. i thought you were going to be home an hour ago." confession... i was sitting alone in the office at work, chatting with matthew on msn. i just laughed sheepishly. patrick knew what i was doing. i was caught. i lived each day counting down til i would see him again. when he came back in the fall it was like i could finally breathe again. it took another 5 months for him to kiss me. i was afraid he never would. i rejoiced when he did. he left for another summer. i knew we would make it, but it killed me every single day. he came home, he got a job, he bought me a ring. i picked it out. i cried everyday he didn't ask me. it took him another 5 months to finally ask me. i REALLY thought he never would. i don't even think i said yes, i just cried and hugged him for an hour, or two, or ten. then he said "i should have done this a long time ago." "uh, yah i know." we were married 3 months later. i was a wife. he was a husband. he made my dreams come true. and i was happy. we have been married for nearly 2 years. and i i am happy still.

my matthew is the most amazing man i know.

2. he works hard at whatever he does, he does his best in every situation, no matter what that is. a job that doesn't challenge him, picking up trash, or serving in a mexican village.

3. he loves his family. he thinks his mom is the nicest human being ever to live. he knows his dad would die for him. he loves his brother, they are best friends, no matter how far apart they are. he wants to protect his sisters from any harm. he loves them all, he cares for them, he would give his left arm if it meant they would be happy.

4. he does the dishes. i don't have to ask him. he just knows much i hate it, and he does them. every day. without complaining.

5. he says he would never put his parents or mine in a home, and i know he means it.

6. he thinks i am beautiful, although i have gained more than a few pounds since we wed.

7. he always fixes the sheet on our bed before i get in.

8. when he got a bike for his birthday, he didn't want to ride until i had a bike and could ride with him.

9. he covers his eyes with his hair when there is a part he doesn't want to see in a movie.

10. he is honest and true, faithful and righteous, he loves God and seeks Him out in everything.

without him i would be lost. he is my constant, my love, my best friend.
Email Post