Several months ago Matthew was stalking the inter-webs hour after hour waiting for Mumford and Sons to announce some US tour stops.  We had read about their plans for a Gentleman of the Road Stopover Festival, and thought they must stop somewhere in middle of America.  When they announced a stop in Dixon, IL we knew that wasn't too far to go... So the morning tickets went on sale we waited at the computer until 10:00:01 am and snatched up our 2 tickets.  The festival sold out quickly, but not before my mother in law could snatch up 4 more for all the fam.

This last Friday night as soon as I got off work we loaded up the car and started to drive.  Asher, to stay on track for his life long goal of getting sick on every vacation we ever go on, got sick on the car ride there.  We arrived late, stayed up later, and spent more time in the car the next day, where we stood and walked for 10 hours without a stroller to help us, because they weren't allowed, but it seemed everyone else somehow finagled them through the concert gates, then we stayed up late yet again, and woke up to spend some more time in the car to come back home.  With a sick baby boy crying "buckle off" on repeat for 3 days, and drooling and spitting and not eating, I had never been so excited to be back home... Now if only it weren't for that thing called a job so I could sleep for 3 straight days to make up for all my lost vacation sleep that I am getting too old to miss...   Mumford and Sons did not disappoint, and we loved that we were able to take Asher to see his favorite band whom he lovingly refers to as "Marcus" (even if he did fall asleep 3 songs in, requiring me to hold his dead weight for the remainder of the concert, for 3 songs, he was in heaven.)  He cried and sang along to Lover's Eyes, and danced like a fool to Little Lion Man.  During I Will Wait he fought to keep his eyes open, but when they finally shut, there was no hope of him prying them back open.

About a month after we bought these tickets and planned our trip, Mumford and Sons announced some other tour stops, one in Lincoln, NE about an hour from our house just 2 days after the Dixon, IL concert.  Matthew quickly made plans to attend with his friend (my cousin) Stephen, and I thought he must be nuts. (And how is that for the back story-- so long.  Sorry I suck at being short and sweet)


Last night when I got home from work Matthew ran out the door, quick as a wink, excited as all get out to see Mumford and Sons one more time. And I was excited as all get out to get to spend a couple of uninterrupted, no distractions, hours with my best Asher buddy.  Being a full-time working mom, who also happens to be going back to school, these moments are far too few.  I am jealous of the time others get to spend with my boy, and although I go to class when he is normally sleeping, I still feel like I am missing out on so much of his life.  So, I quickly changed into sweats, changed his diaper and said, "Asher, do you want to go get some french fries and ice cream?"  For a split second, he debated staying home and watching McQueen (which daddy said he had already watched all day long) but then he grabbed his little Lightning McQueen car and started down the stairs saying "ice cream, ice cream, french fries."  Asher was still running a fever, and a trip to the Dr earlier in the day advised us that he had a virus that should start going away soon.  The sores in his mouth were dwindling, he was no longer drooling, and he was forming words instead of cries, a fever remained signaling a still contagious baby boy, but I took him out anyway.

We were the only people at Runza, and Asher picked a table right in the middle of the room.  He sat like a big boy with no booster, picked the cornbread off his corn dogs before eating, and blew hard on his too hot french fries.  He asked to get down 536 times, but stayed put when I asked him to wait.  He dropped his ice cream cone on the floor, and the nice man at the counter gave him a new one.  And then we went outside to play on the outdoor playground (this is the only fast food restaurant I know of that still has an outdoor playground).  He climbed up the ladder and down the slide at least 42 times, and when I said it was time to go, he said "one more slide".  And since it was so darn cute, I let him go 2 more times.  When he said again, "one more slide,"  I stuck to my guns and we walked to the car.  It was already bedtime, but I couldn't stand to put him in bed when I had these few hours available with him, so we made a nice pillow and blanket bed on the basement floor and watched The Hunger Games.  When they were setting up the camera equipment, stages, and screens for the reaping, Asher said "Marcus. Park. Boom Song." And he sang a piece of Lover's Eyes.  "Boom Song. Loud. Marcus. Park."  and he sang a little more.  It seems those 3 songs he heard Mumford and Sons play left an impression on this little boy.  We cuddled and chittered chattered until he asked for mama's bed and milk.  And because it was our special date night out, I let him go to my bed and cuddle with his pooh and watch Cars again while his eyes closed and he drifted off to sleep.

And I wished that every night could be exactly like this... 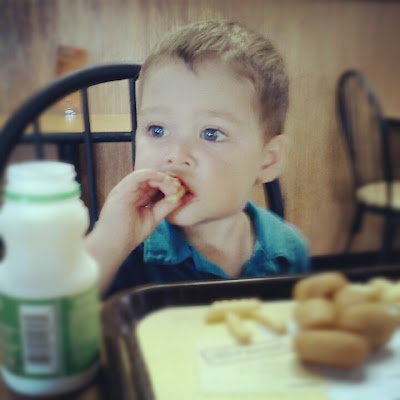