what does it take to become an uncle?

is it blood, flesh and bone, DNA?  surely.  if you are a brother and your sibling has a child, you become an uncle.

but can it also be something else.

my uncle dan was there the day i was born.  before i was cleaned off, when i was still all gooey and squishy and disgusting, he held me.  it was the beginning.

he and my dad met their first day at Grace University.  they were instant friends.  uncle dan may be my dad's most important friendship of his life.  after mom and dad got married, uncle dan ate dinner with them lots of nights.  they remained friends through many years, the closest of friends.  500 miles away or more, couldn't separate them.  he has been a constant encouragement and confidant to my dad for over 30 years.

he bought me my first pair of nike's, when i was just a babe.  when asher was born, he bought him a nike sweatsuit, to pay homage to my baby gift.

he says he let me eat ice cream cones and junk food when i was just a baby.  i know he must have.

he bought me my first barbie.  and to be correct, she was really a skipper.  he searched and searched for the barbie "without the bumps" (aka boobs) he didn't want me to get a complex from my doll playing.

he bought me kangaroo sneakers in kindergarten.  i thought they were the coolest.

when uncle dan got married, we were there.  aunt shelly was his perfect match.  he was so relieved when the pastor forgot to say "you may now kiss the bride".  and turned a million shades of red when he remembered and announced it again at the reception.

i loved to play with his collection of kaleidoscopes.  i remember him working magic with a yo-yo.

he has always called my brother jesse, chester.  i don't even know why.  he calls him chester to this day, i still don't know why, but it warms my heart.  no one else in the world calls him chester.  just uncle dan.  that is just something special between them.

he traveled 500 miles to be there for my high school graduation.  it meant the world to me.

the day before i left for college, he gave me a $5 bill.  he warned me i was headed for a hard semester, a lonely semester, that i might feel lost and afraid.  aunt shelly kept asking him to stop scaring me.  his words were the most honest college advice i ever received.  he told me when i was feeling bad, and alone, and like i wanted to quit in those first couple days on campus to take that $5 and buy myself an ice cream cone.  that first lonely early evening at college, i drove myself to the ice cream parlor, crying the whole way, and bought myself a giant cone of butter pecan.  uncle dan knew exactly how i felt, he had been there before, and he told me the truth.  that ice cream cone was the best i ever had.

uncle dan is not my uncle by blood, or flesh and bone, or DNA.  but he is my family is every sense of the word.  becoming an uncle is far more than just a sibling having a child... it is love and dedication... it is something that lasts a lifetime.


last week uncle dan had a stroke.  at 51 years old.  with 2 girls away at college, with another daughter and son still at home.

when i saw the words, tears fell silently from my cheek.  not my uncle dan.  not my daddy's best friend.

his family is strong.  they learned to be stubborn from him.  but they are still feeling a little lost.  aunt shelly is always sure and in control... she is striving to remain that way, but finding it hard.

this will be a very long journey for them.  danger will still lurke.  and i ask you to pray with me.

PRAY BIG.  pray for a FULL HEALING for uncle dan.  pray for strength and for guidance for his family, and for the medical staff.  pray for clarity for aunt shelly in the coming days, as the shock fades.  pray for peace and comfort and little pain for him, and for the whole family.  pray that God be glorified through this, and every step in their lives.


he was with me in the hospital on that day i was born.  it was the beginning.  and now i will try to be there (in body, in spirit, in mind) with him in the hospital, in rehab, at home, in these days that are to come.  this will not be the end. 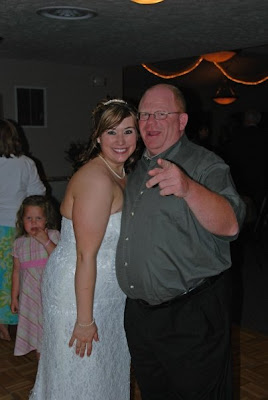 me and uncle dan on my wedding day.  (ignore my bat wing, i had gained a few pounds since i bought the dress, and this is an unflattering angle.)


mommy gray:  thanks for reading!  we are blessed.
sarah anne:  so is asher.  it is fun to watch.
cheryl:  you continue to be in my prayers.  thank you for sharing, i can say the same for asher.  i know i will always be so grateful for the love this daddy and boy share.
Email Post